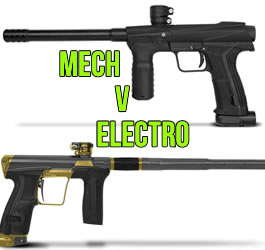 Choosing a which paintball marker you want to spend your hard earned cash on can be a difficult decision. Once of the issues you may face is whether to buy electronic or mechanical. They both shoot paintballs, but what’s the difference? Well as always we're here to help.

All markers are designed to shoot paintballs at high speeds using either Co2 (carbon dioxide) or HPA (high pressure air) as a propellant. When you shoot a marker there is a small bolt which pushes the ball into the paintball barrel. A valve then releases compressed through the bolt and down the barrel forcing the ball to shoot out. The major difference between electronic and mechanical is the way the gun advances the ball into the barrel, seals the barrel and releases the gas.

The most common design of mechanical guns are a blowback design. Once the trigger is pulled, this releases a bolt wich is forced forwards via a spring which pushes the paintball into the barrel, a rear bolt would then hit a pin allowing air to travel into the barrel. The bolt is returned to its original position by the expansion of the gas.

Another popular design is the autotocker, which uses a pneumatics to fire the paintball and return the bolt.

A recent resurgence in competitive mechanical play, or the 'Classic' format has seen a new demand for high performance mechanical markers. Markers such as the EMEK, GTEK M170R or Shocker CVO use more modern spool valve designs, typically found in high end electronic markers ,which are actuated mechanically.

The obvious disadvantage is the slower rate of fire. Also, blowback mech markers using co2 aren't likely to be as accurate either.

Higher fire rates mean hitting a target can be easier through sheer volume. Electronic markers will also have programmable fire modes, allowing you to switch it up for different styles of play. One of the biggest advantages with electronic paintball markers is their ability to 'see' if a ball is in the breach with 'eyes'. When turned on, they will only allow a paintball to be fired when  it is fully in the breach of the marker, reducing the chance of ball chops.

These markers are more expensive.  They generally require HPA rather than Co2, so make sure you have access to HPA before buying. Also, you will need batteries to run your electronic marker (typically 9V). It really is all down to personal preference, you should take into account being new to the game or whether your an avid paintball player. If you have any questions don’t hesitate to call us on 01642605000.