Woodsball is definitely the most popular type of paintball, and the term covers most traditional paintball games that are played primarily for fun. Despite the name, it does not have to be played in the woods, although this is undeniably the most common and popular setting for the game. In fact, the defining feature of woodsball is that it offers varied terrain - for which woodland is ideal but not the only option. This creates an interesting game with plenty of play options in which strategy and tactics can be pitted evenly against raw firepower and fast shooting. 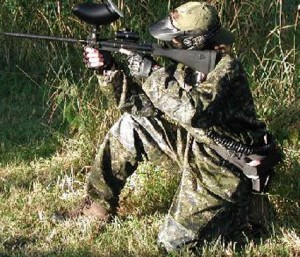 While woodsball is most commonly and popularly played in wooded areas, it can also be played in a range of other settings. Most notably, it can be played in mock-ups of urban battle grounds which may be constructed in what is otherwise an open landscape. Whatever the setting, useful features such as trenches, bunkers and defensible structures tend to be included to keep things interesting. Within these settings, a range of different formats can be played. For example, Two Flag involves putting a flag at each end of the field, and assigning each team to one of those flags. Teams are then tasked with capturing their opponents' flag and returning it to their side of the field while protecting their own flag. Alternatively, teams can be pitched against each other in an elimination game. This format involves setting both teams loose on the playing field with the goal of eliminating as many of each other's members as possible within a certain time limit. The team which has eliminated the greatest portion of the other team within this time limit will be declared victorious. A third option is Attack and Defend. This format involves one team defending a location and the other team trying to take it over. This usually involves an attacking team that outnumbers the defending team significantly - it's balanced by choosing a location such as a hilltop that gives the defending team a significant advantage. 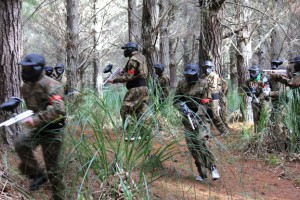 Many of these formats can also be applied to speedball games, which use a much more open field. Indeed, Two Flag is a popular speedball format as well as a woodsball one. The different choice of terrain, however, introduces some very marked differences. Woodsball puts raw firepower on an even footing with tactics and stealth, while Speedball puts more emphasis on speed and accuracy of shooting, and this means even games played in the same format will proceed differently. For example, in speedball Two Flag games, teams usually engage in a pitched battle and it is common for a team to only emerge victorious after completely eliminating the opposition. In woodsball, the ability to sneak and the greater variety of tactics often allow a team to get the flag safely back to their end of the field without completely wiping out their opponents. Woodsball is an extremely popular form of paintball, especially (but by no means exclusively) among more casual players. This is because it is designed primarily for the enjoyment of players rather than for spectator enjoyment or for easy oversight as a tournament format. It also offers a much wider array of tactical choices and allows different play styles to compete more evenly. Image Source: Image One = www.paintballimpact.com Image Two = paintballglasgow.wordpress.com
March 2, 2015 | View: 1273